What do St. Lucia Government Press Secretaries have in common with Al Bundy? 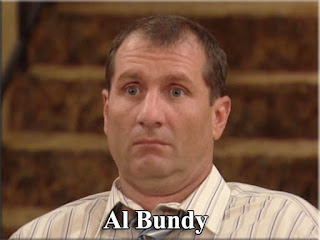 Imagine my surprise last week at the big brouhaha over Clinton Reynolds' question about the qualifications of the new press secretary to the prime minister, Jade Brown. Let me state for the record that I was not goo goo gah gah over Jadia Jn. Pierre (the PM's former press secretary) and neither have I been for any former press secretary, as their position, in my estimation, was one of service and not celebrity. Unfortunately that celebrity which has slowly crept into the persona of the press secretary has more to do with partisan politics rather than the calibre of information dissemination.

Clinton Reynolds' question, whether we like it or not, was valid and is what should be expected of any candidate or appointee who serves the prime minister of Saint Lucia. Whether a political or public/civil service appointment, the qualifications of any individual obviously is of importance. From the lowliest clerk to highest grade position qualifications and experience are discerning factors for consideration of one's services. It must also be realized that the post of press secretary is, in fact, not simply beholden to the prime minister, but rather to the Office of the Prime Minister. By extension this means being accountable to people of Saint Lucia as well.

Since it was deemed necessary and relevant to state that Jade Brown "hails from the community of Canaries, and serves as the Chairperson of the Canaries Carnival Community" isn't it prudent and logical that one would also be curious of her academic qualifications? Is it such an insult to ask what they are?

When any member of the press poses a question it ultimately serves the purpose of informing the public; which is what their job is supposed to be. Jade Brown's current role as the prime minister's press secretary places her front and center before the cameras and microphones as opposed to being behind them and asking the questions. And since she has accepted that role it is expected that she be capable and accountable from her first day on the job. I was rather disappointed that so many felt it was needed to coddle Jade Brown on her first day simply because of a question on her qualifications.

Over the years, I have observed an increasing arrogance from the press secretaries regardless of administration. They have become entities unto themselves and have been allowed to run roughshod over those whom they deem to be asking questions unfavourable to the sitting administration. All of this to the amusement and applause of those who favour what is seen as protectionist behaviour. It seems they have been allowed such liberty since the utterances and actions fit a particular agenda and would be seen as politically incorrect had they been performed by those who are at the helm.

Press secretaries must realize this role places them in the limelight, and thus under great scrutiny, causing their every word, press release, and explanation to be shredded for any meaning; intended or unintended. The injection of political barbs and unwarranted jabs at the opposition diminishes the credibility of that office since it is seen as nothing less than political opportunism for the sake of scoring cheap political points. Somewhere in the mix of it all the dissemination of information has apparently taken a secondary role to politicking.

With the position of press secretary comes the inadvertent encroachment on private life which is to be expected in such a high reaching and delicate position. When a press secretary posts on social media in their capacity as a private person and also in their official capacity and discussing the same issues, it becomes very difficult to differentiate private and professional positions; it can be expected there will be spillovers from one to the next. Just as the prime minister, they must be seen to represent all the people in a respectful manner with the sole purpose of serving. Instead, what we too often see is a condescending and almost contemptuous treatment of those who disagree or question the government's position or policies.

Whether as tall as George Foreman, as demented as a washed-up revolutionary, fading away in dim light, strutting like a bantam cock, or  sugar in the teeth, all are guilty (language is  wonderful isn't it?). We must depoliticize an office which does not serve the vested interests of Saint Lucia by being politicized.

So where does Al Bundy fit into all of this?

Lead actor in the much acclaimed sitcom 'Married with Children' Ed O'Neil (Al Bundy) suffered from what is referred to in the film industry as being typecast. This simply means that because he had been associated for so long with the goofy persona attributed to him during the eight seasons of the show audiences anticipated his subsequent roles to be of a similar nature. Appearing in different roles, occasional beer commercials, and other bit roles did not meet the same celebrity since the 'Al Bundy' persona is what remained dear to their hearts and as such limited his marketability for any meaningfully paying roles. Although he has been able to work in the industry he will be forever labeled as Al Bundy the goofy dad actor.

Ed O'Neil on being typecast

Press secretaries seem to take one of two paths once out of office. Either remaining in the political sphere trying to maintain their public visibility, or fading away into obscurity in nondescript jobs. It seems they crave the once-had public image and prominence and from time to time inject themselves into national issues in an apparent attempt to bask in the limelight once again, but for a brief moment. Because of too much venom and politicking they have become toxic and their lingering 'attack dog' image makes them forever etched in the minds of all who were exposed to their presence.

Don't get me wrong, I believe every one of our (yes I said our) press secretaries is loved by family and friends, but sadly their time in office has seriously tainted all credibility because of the manner in which they performed. Maybe it's time for a better analysis of this paralysis which locks them into a mindset which ultimately does a disservice to their futures.

Jade Brown, you have an ideal opportunity to go against that grain and change the press secretary's image forever. Let your tenure be one of poise and grace; beauty and substance, professionalism and example. The past is the past and the trail that was blazed was not yours. Nonetheless it was blazed and got you to this juncture. Don't be giddy by the lights or the cameras.

Whatever you do, know that the people will be watching.

Every Step You Take

Posted by Nobbie at 4:47 PM No comments: