Robert Lewis Gives Me The Eye On A United Flight 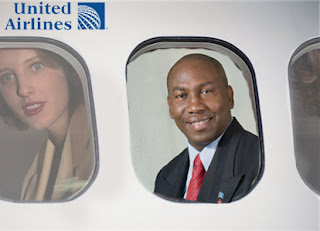 I waited only 5 minutes for my Uber to the airport. It was some sort of new model Jeep driven by Joseph. The thing about the Uber system is that it is exactly real time on your screen so usually the cab is right on top of you although the app shows it a minute away. Well, this morning, Joseph blew past my front door like he was at the Indie 500. Holy smokes man, doesn’t your Uber-furnished GPS ding dong say, “The address is 10 feet ahead on your right?”

Anyway, he did a three point turn, a-la driving manual, but failed to observe the solid double yellow line running down the middle of the road. Somehow I think even Stevie Wonder would have seen those solid lines. I open the back door and he asks me whether I want to put my gigantic suitcase in the trunk. Well, of course dude, it won’t fit in the back seat!

He exits the driver side and opens up the trunk, holy crapperoo, Batman!! This guy has a gigantic woofer/bass/speaker system occupying half the blasted trunk. And it’s all layered in Perspex! Is this guy operating a mobile disco? Well, after much grunting and groaning, we were able to jam that big boy into the precious few inches left in the trunk.

Arriving at Newark airport, there doesn’t seem to be anything much happening at terminals A or B - must be a slow day. Up ahead in the distance, United Airlines Terminal C looms as well as a sea of red. Brake lights, damnit! And lots of them. What in tarnation could be causing such a mess at 7:15 A.M.? Five minutes later, we pull up to the curb and I bail out. I’m not missing my flight today!

Rolling into the terminal with my now-squeezed yet still new suitcase, camera tripod, camera bag, and laptop bag, it is pure chaos! No clearly defined lines, just people...a lot of people! It was a damn free for all it seemed at first. Lord Jesus, don’t tell me they’ve adopted the same system as Air Canada! Well, my brief apprehension was confirmed - there were check-in kiosks all over the terminal floor. Big people, small people, grannies, whiny kids, people of every shape, size, and state of wakefulness. I finally get to Marly who is attending one of the kiosks. (I had quickly scanned her name tag while she was attending to the person in front of me).  “Good morning Marly,” I said cheerily. She looked up and asked where I was traveling to. “Saint Lucia,” I replied.  “Have you ever been there Marly?” I asked. “No, not yet,” was her reply. “Please put your suitcase on the scale,” she instructed. “Overweight – Overweight – 53.5 pounds,” the scale display flashed.

“You’re overweight Mr. Williams,” she said. “But it’s only 3.5 pounds,” I whimpered. What the hell, United, three and a half friggin pounds!! Marly then proceeded to instruct me that overweight was only allowed up to half a pound; anything more would be $200! What! Oh hellz no, Miss Marly! You’re not even related to Bob.
I must admit she did have lovely brown eyes and nice lips with just the right amount of lip gloss. But not today missie; you’re not buttering me with those looks. I protested but she said there was nothing that could be done as they were ordered to strictly enforce those weight limits. “But you can remove some items and place them in your carry on, Norbert.”  She called me by my first name! Now I know she must like me and just putting on the squeeze so she can be nice later on and let me go along with my three and a half pounds. You know, the good cop, bad cop trick, but this time all rolled into one person.

I moved some items into my carry-on bag and tackled the scale again. “Overweight – Overweight – 51.5 pounds,” it flashed this time!  “Sorry Mr. Williams. Can’t you remove a pair of shoes?” I looked up at her, already sweating from all this early morning work, and her brown eyes and lovely lips disappeared. I was confronted by the devil! Marly had now, for whatever reason, suddenly transformed into a horned woman in a skin fitting leather suit with a friggin’ stiff leather whip looming over me. Her eyes were blazing red, smoke and fire spewed out from her nostrils as she said in the most fiendish and devilish voice I have ever heard, “Twooooo huuuundreeeddd doooollaaaarrsssss!”  Luckily that only lasted a few seconds. A fresh attempt at the scale and I was within the United decreed half pound limit above fifty.

After sending in my bag, the line to Jericho was the length of the terminal building. Winding around those tensa barriers like some human snake, the multitudes of early morning travelers finally made it through the sniffer dogs and surly TSA officers.
Walking towards my gate, the usual overpriced airport stores and boutiques lined the terminal area. As I passed what appeared to be a tech store with speakers and other small tech gadgets, playing on one of the systems within was Bob Marley’s “Now you Get What You Want (Do You Want More).” Oh Marly, you little devil.

Gate C127 was waiting for me with open arms as almost everyone had already boarded. Stepping onboard the 737-800 the first class section did look impressive; nice wide leather seats with lots of leg room. Passing into Economy I noticed a face looking up at me, somewhere around seat 8A. In an instant I made out the face, it was Robert Lewis, our Minister of Education. Shit! Why was he looking at me like that?  “Good morning, Mr. Lewis,” I said, and reached out to shake his hand. He nodded with a little smile and shook my hand.

How did he know me to make the I-know-you eye contact in the first place? Oh damn, maybe he knows I wrote about him in my blog! Damnit – well, he’s gonna try and get me off this flight. I was almost sure of it. But isn’t it Saturday, and isn’t Robert Lewis a Seventh Day Adventist? Isn’t the end of his Sabbath still a few hours away? Are Seventh Day Adventists not supposed to travel, party, consume alcohol, and all those other things on the Sabbath?  Ooooohhhh, I caught you Mr. Minister.

Anyway, we pulled away from the gate and I was certain then that whatever he wanted to try would have to wait until Saint Lucia. You get your boys Robert, and I’ll get mine. Let’s see how you roll then! But since when that’s your role anyway? 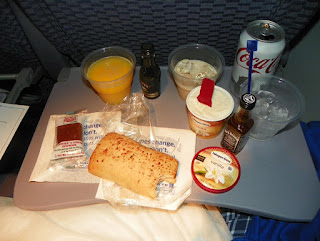 After takeoff, I dozed for what must have been an hour only to be awakened by the smell of ham and eggs, and fresh baked bread. It seems United has engaged the services of some psychological marketing and sales guru. Unlike previous flights when you were only informed that sandwiches were available for sale, they now found it fitting to let you smell what you were missing. No more peanuts and juice to take the edge off your rumbling innards. Oh no! Hell no! You’re going to be tortured before you get the freebies. “Would you like a ham and cheese sandwich sandwich?” “Tuna?”

And of course those little bottles of alcohol being brandished surely tortured some poor souls who were only dry since they boarded.  It seemed like flight attendants were now street vendors hawking the United wares. Soon I expect to see t-shirts and other merchandise on those carts rolling down the aisle. What's next? Perhaps fresh popped popcorn and a fee for trash removal for those people who think they can beat the system by carrying on their own food. They’re gonna get you.

The flight was uneventful past that point and we landed at Hewanorra International Airport fifteen minutes ahead of schedule. The Boeing 737 taxied  to the furthest gate near the highway, and after what seemed like an eternity the doors were opened to allow the cooped up passengers to into the blazing hot sunshine on the newly surfaced apron...heat in your tail! The walk through the far reaches of the cattle pen to the arrivals area was enough to prepare any athlete for the Olympics.

Thankfully the previously arrived flights were mostly foreigners so the residents line was smooth sailing.

Off to the side I see Robert Lewis breezing through Immigration. No difference in clearing the authorities for you today Mr. Minister because the locals are few and far between. Now what good was that diplomatic passport for you, I almost beat you past the lone Immigration officer.

Walking into the baggage claim area I again saw Robert Lewis, this time he was waiting for his bags. I cut eyes for him and he flashed me a look from behind some tourists. "What's it gonna be Robert, you wanna take it to the back of the hall?" I challenged. "All I see right here is space and opportunity Robert! It's Robert vs Norbert! What you gonna do now...huh, huh?"

He quickly grabbed his bags and made a quick diplomat exit. 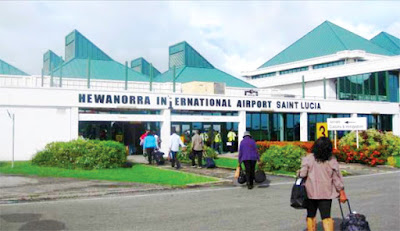