Online Freedom Under Attack - Is Digicel a Telecommunications Bully? 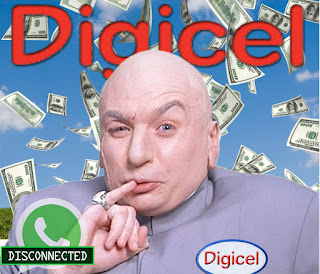 Lets get it straight from the outset, Digicel and all telecommunications companies operating in Saint Lucia are out to make money, a lot of it! They don't give a shyte about anything other than hefty returns for their owners and investors. PERIOD! So now that we've got that out in the open lets deal with the hot news on the block about Digicel reportedly blocking voice calling via Whatsapp.

In a galaxy far far away through the monopoly black hole Cable & Wireless ruled supreme, and handled their Saint Lucian empire with an iron fist. Competition was nonexistent as they had been blessed, by the government, with unfettered control of the telecommunications market. For over 100 years, since the 1870s, they ruled in the Caribbean. As usual, monopolies become arrogant and are slow to innovate since there is little fear of competition and therefore no incentive to spend any more than they have  to. It was also a time of analog communications, and the Internet was only available towards the turn of the century to only those with the deepest pockets. Computers were exceedingly expensive contraptions to be viewed and dreamed about by those who had access to magazines on the subject. Smartphones were not yet even invented and most internet connectivity was via dialup...very slow dialup.

Liberalization of the telecommunications industry occurred when The Eastern Caribbean Telecommunications Authority (ECTEL) was established on 4th. May, 2000 by a treaty signed in St. George’s, Grenada, by the Governments of five Eastern Caribbean States - Commonwealth of Dominica, Grenada, St. Kitts and Nevis, Saint Lucia, St. Vincent and the Grenadines. It was a watershed moment and seen as an opportunity for competition which would greatly reduce prices and improve technology since many had considered Cable and Wireless as a money sucking parasite. Indeed, rates for all services offered then were among the highest in the world.

Enter Digicel, a fledgling telecommunications company founded in April 2001 by Irish billionaire Denis O'Brien. Digicel was the darling back then. New phones, competing rates, and 2G. Wow! Prices on cell phones were reduced overnight by Cable and Wireless to unheard of prices.

Fast forward to 2015 and Digicel is now seen by many in what has become a duopoly seemingly as bad as the loathed Cable and Wireless monopoly. They have been very aggressive in marketing and come across to many as bullying and avaricious in their battle for market share. It seems that when companies pass a certain critical mass that they lose all consideration and care for the customer and become solely focused on squeezing every last cent they can by any means necessary.

Digicel got into the St. Lucian market with promises of innovation and actually boasts in their company's slogan that they are"The Bigger Better Network."  That network, and the services provided was based on new technologies making it onto the market as opposed to C&W's legacy and deteriorating infrastructure. And of course, they were a smaller and more nimble company able to make changes faster than the mammoth Cable and Wireless which had been accustomed to a non-competitive market and bureaucratic corporate structure. In essence Cable & Wireless was caught up in an old business model and was very slow to adapt. Digicel benefited from that, tremendously.

But lets get back on track...Whatsapp.

Since those early years of this 21st century Internet technologies have advanced at a blinding rate, unarguably faster than the preceding 100 years of Cable & Wireless' presence in St. Lucia. Dialup disappeared, DSL is a technology fast disappearing in the rear view mirror of technology, and practically all communications and entertainment is moving towards pure IP (Internet Protocol). When Digicel rolled out services, there was no Whatsapp, no Viber, Facetime, or any of the host of other voice services currently available for communications between end users.In fact the speeds then would have rendered those services useless. 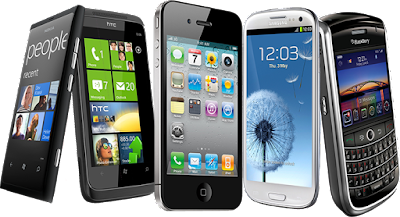 Even though any similar services (Skype) were available the presence was only available on desktop computers. With the advent of smartphones, apps, changed the world. Smartphones were miniature computers with all services available in the palm of your hand. 3G, and now 4G blew everything out the water. A company which was granted a license to provide voice services was now competing with itself because of the Internet services which they also now provide.

What took 100 years to happen to Cable & Wireless has now happened to Digicel in 10. Technology has now developed so quickly that Digicel wants to remain in their same early2000s business model. The great issue here is that voice is no longer analog or only available on feature phones. Now, voice calling is no longer relegated to  cellphone or telecommunication companies. Any individual or company can roll out their own IP services via the Internet from anywhere in the world!

Whatsapp is one of these apps which has turned the world upside down with regard to voice calling because of it's reach and ease of use. After being bought by Facebook for US$15 billion it has exploded from a few million customers to almost a billion, worldwide.. Running purely on IP it requires only an app on the relevant cellphone platform to function. The only other needed component is a data package from your service provider over which calls can be placed to any other Whatsapp subscriber.

The problem here is that voice is no longer controlled by proprietary hardware or network. These are changing times, and sadly for providers, the old model of voice calling being the cash cow is quickly vanishing, the same way how text messaging is practically dead.

In response to this dramatic change in technology it has been reported that Digicel has resorted to blocking Whatsapp on their network. In response to these allegations they have ofered some of the most ridiculous explanations in denial of these accusations. In one instance it was reported they said that Whatsapp is implemented differently on different providers' networks and the problem is not because of their blocking of the Whatsapp service.

Yeah right! IP is IP and performs no differently on any network unless there are hardware problems or serious congestion issues. It is my opinion that if Digicel is not blocking the Whatsapp service outright that they are de-prioritizing their packets adding significant latency and causing the connections to fail. In other words the packets take so long to reach their destination that they timeout.

But why would Digicel feel they could attack the very tenets of the Internet, net neutrality? This allows all traffic from any provider to traverse all others unfettered. It is why we can access websites all over the world, as the Internet is exactly what it is called, an inter network of networks. If network neutrality is destroyed then Lime can block iTunes, Spotify, Radionomy, and all other music services which compete with their own Deezer music service partnership. Digicel could block access to Lime's or other competitor's webpages. The Internet would be chaos and information would no longer be free.

Pretty soon the 5G specification will be ratified (expected 2019) and data speeds are expected to be at least 100 times faster than the current 4G. Imagine what the world will be like then. Cell phones and mobile devices will then be amazing in their functionality. It will also signal the end of voice plans as we know it. Subscribers will simply purchase data and use apps to connect to whatever services they want on the Internet. If you think telecommunications is amazing now expect it to be blown wide open in a few years. This will happen! These Whatsapp-blocking moves are just a mad dash to squeeze as much money out of us as possible until the inevitable.

The very technology which should free us and make our citizens more connected is what's used to squeeze every cent possible through our bleeding eyes, to our noncompetitive detriment. Which reminds me of a time many years ago when Cable and Wireless ruled supreme when I saved their webpage of rates for dedicated internet access. Please go down this road in history with me and see how we were choked under similar circumstances when Cable & Wireless was the big gorilla in town. Rates are with yearly contracts with setup and monthly rates. Look at the speeds and rates and figure out how we could have ever been a viable option on the world market. 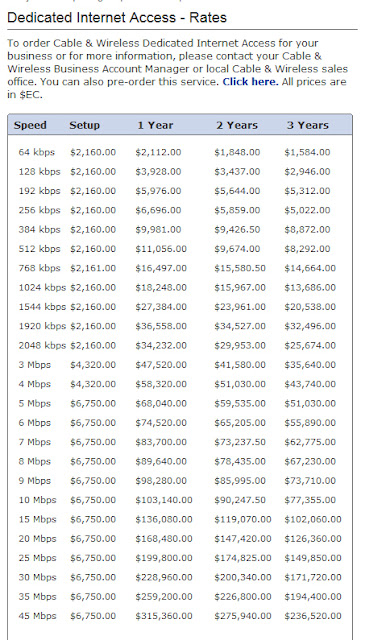 We all know that the telecommunications industry is big bucks. Big money is paid for licenses, and big money is made for the services y the consumer. So why would a company block services so blatantly and thumb its nose at us almost defying any action? Could it be they expect our elected representatives to be silent because they are 'owned' by these very telecomms companies? Is there institutionalized low level bribery or largesse extended to our elected officials which makes them disinclined to deal with these situations head-on?

Is it not a conflict of interest, and compromising of integrity, when an elected official of our government is gifted smartphones by telecommunications companies soon after being elected into office - no charge?  Who does that phone belong to ultimately, and who does the phone records belong to? Even more blatantly, Digicel donated 4G enabled laptops to parliaments and were boldly allowed to make that presentation at our House of Assembly!! Does nobody see anything wrong with this at all!! 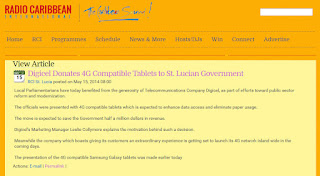 We have high ranking members of our parliament making appearances at the launches of products by telecommunications companies without reservation in no official capacity! Is this not a conflict of interest when these very same officials have to render decisions for or against telecomms companies in our House when applications are made for licenses or regulations enacted?  Can we ever expect their decisions to be impartial? Are our officials so desperate for freeness that they will allow themselves to be pimped and surreptitiously used to advertise products for a few cocktail sausages dipped in pepper sauce and ketchup, or some oily accras on a plate?

It is true that elected officials are also private citizens, but these actions call into serious question the impartiality they are called upon to exercise everyday on our behalf. Aren't these instances textbook examples of a clear conflict of interest?

A widely used definition is: "A conflict of interest is a set of circumstances that creates a risk that professional judgement or actions regarding a primary interest will be unduly influenced by a secondary interest."[1] Primary interest refers to the principal goals of the profession or activity, such as the protection of clients, the health of patients, the integrity of research, and the duties of public office. Secondary interest includes not only financial gain but also such motives as the desire for professional advancement and the wish to do favours for family and friends, but conflict of interest rules usually focus on financial relationships because they are relatively more objective, fungible, and quantifiable.

So, is Digicel not concerned because they believe our officials are in their back pocket?