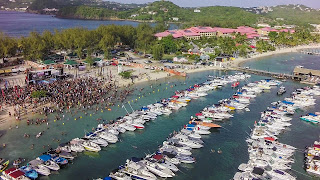 Lets get it straight, 'Mercury Beach' at Pigeon Island has blown 'St. Lucia Jazz' out of the water like the HMS Sheffield by an Exocet missile during the Falklands War. Never in all its fantasy history has St. Lucia Jazz seen so many boats 'up Point.' There were no grossly overpaid artistes either, but still the people came...in droves. It was like one big Spring break!

And so, for the second consecutive year "Mercury Beach" was held at Pigeon Island bringing in between 7 and 8 thousand fans who jammed the beach to attend an event organized by marine engine maker Mercury. Making the trip this year were 70 catamarans and 400 motor boats! To participate in this year's event it is estimated that Martiniquans spent between 3 to 4 million euros for boat rental,  hotel accommodation, meals, taxis, and a two day pass to the event (55 euros).

"Mercury Beach"  is one big "Aqua Action." For those of you who don't know what Aqua Action was, go ask your parents. The organizers of Jazz must be green with envy when they see the astounding success of this event in just two years. This envy is not because of greenbacks, oh no! No US dulluhs here baybee..is strictly euros flowing up deh. Uh huh.

Sandwiched between Pigeon Island and the so-called private Sandals beach (slip the guard a few euros and a lukewarm Piton and you get in with no hassle) the last spot for locals to bathe freely was transformed into the biggest beach jam since....uhhhhhh...last year's event. By all accounts this event dwarfs Jazz by leaps and bounds. There were more jamets than Jazz, more drunks, more artistes, more poom poom, more G-strings, more rum, more fried chicken, more cougars, more weed, more drugs, more boodeh robbah, more vieux neg, more free condoms, more glass bottles, more trash, more foam, more pee, more sea ants, more wining (or is it spelt whining, or winding?). Anyway! There was no shade! You get up there and is sun in your a$$! Too hot? Then you take a dip and come out to bake again, this time seasoned with some Caribbean sea salt.  Bake, season, wine, repeat. You get the idea.

But putting all this aside "Mercury Beach" is like a shot of adrenaline into the vein of St. Lucia's flagging economy. The benefits to local businesses are apparent and don't need an accounting wizard to explain with flow charts and PowerPoint presentations.

There are, however, concerns from many quarters about the environmental impact of this event. Although there is the usual garbage, and abandoned drunk or crackhead cleanup, much is unknown of the inevitable garbage dumping and chemical contamination from this unprecedented number of boats moored off Pigeon Island. It would have been a good idea to have an environmental impacts assessment done by the relevant ministry or agency in order to determine whether our national park can survive ecologically. In all sensibility, an environmental impact charge should be attached to any permit issued for such an event. This would not only cover garbage removal but aid in determining any effects and necessary measures to minimize any adverse effects. Recently New York City required Uber taxi to conduct an environmental impact study as a condition of their license to operate, requiring submission in three months. I daresay we need such a study and report before the next iteration of this event.

To derive maximum benefit from this event we cannot only be focused on the monetary aspects but also on the social, ecological, drug, crime, environmental, and other impacts on our country. Although there is much of a boost to the economy the attendant negative side effects can be worse than its benefits.

Already plans are afoot for "Mercury Beach" 2016 but reports are that the Martinique tourism authorities are trying to woo the event back to their shores. Could this be the last we see of this event? Time will tell.