THE BURIAL OF ST. LUCIAN CARNIVAL - CAN IT BE REVIVED? 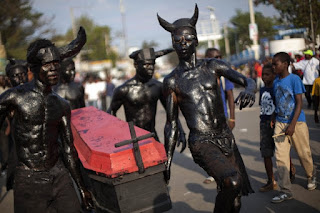 They say that the burial of "Vaval" signifies the end of a period of excess during Carnival and prepares the recovering devilish populace for the Lenten season. All that is and was unholy and of the flesh would go down in the hole amid much ceremony, never again to see the light of day because of our shame at being enticed and influenced by the flesh. If only that was the case!

Sadly it seems that instead of moving forward year by year and learning from the previous year's Carnival mistakes we return to the cemetery and raise Vaval from the dead! Jumping in the same old costumes, same old ways, and same old mal mes.

It is too often lamented how the St. Lucia carnivals of today fall far from those of yesterday in culture, quality of costumes, and just all out fun. Nowadays there seems to be little to no culture involved, the seemingly almost same costumes from year to year, and just all out vieux neg behaviour which has caused the street jump-up to be called to a halt no later than 6 PM.

There is absolutely no doubt that Carnival has become a lucrative business for band leaders and others who have capitalized on the party aspect of the event; kudos to them. But at the end of the day we have to examine Carnival in its entirety and the overall benefit to Saint Lucia. After all it is supposed to be a cultural event, and as such should reflect who and what we are as a people. A cultural event suggests deep roots in our history and identity. It should showcase to all those who observe its depiction as a billboard and attraction to our lovely island.

In this modern age, particularly since our economy depends on tourism for at least 80% of our GDP, we should use every asset we have in bag of tricks to lure every tourist dollar we can. St. Lucians travel the world and see how every possible option is exploited to draw visitors to cities, towns, or countries. New York, Miami, London, Toronto, among a multitude of others are prime examples. Yet for some reason Carnival has been, and continues to remain, a red headed stepchild on our calendar of events.

Please don't be fooled into believing that I am suggesting it is all a disaster as I am sure you will agree that the revelers have a darned good time; throw two stones together, mix in some alcohol, toss up some feathers from China or Trinidad, and almost any St. Lucian will have a damn good time. Hell, even Friday night in Gros Islet is a blast! (no pun intended).

Many moons ago, if you all remember, Carnival was moved from its traditional time in February to July. This was done, so they said, to avoid the competition with the Trinidad and Brazil carnivals. Although there were cries about the effect on students sitting CXC exams Carnival landed on July like nobody's business. It would have been expected that now we were free and clear of our main competitors for visitors to our shores, that we would attack our time for wining as a golden opportunity. But nooooo! Instead, Carnival descended into a virtual free for all.

If I remember correctly much of the soul and essence of Carnival began to evaporate once steel band began disappearing from the road. And you know who was responsible for that? Burning Flames! At least that is my perception of it. Not saying that they were a bad thing, I love them, but Somehow I believe they are the ones who really introduced the big truck syndrome to Carnival. How many of you remember Diamond Steel and the other steel bands being pushed down the road in their galvanized pipe structures. Legions of Saint Lucians would lend their muscles, for free, pushing these steel drum contraptions around the city. You could feel the rhythm in your heart. You never felt tired. And for many it was a free pass into the Mindoo Phillip Park on Carnival Monday. Sadly those days are no more.

Today Carnival is a pale reflection of what it once was and too much of de-same-ole-ting. Yet there is hope if our elected officials can see the value of incorporating Carnival into our tourism product. Why is so much money pumped into Jazz when Carnival has been around for so much longer? And all this money continues to flow Jazz-side when it has been said to be operating at a loss since its inception! Why have Trinidad and Brazil been able to make their carnivals world renowned events, and we have not?

Since so much money is already being directed to the coffers of Jazz why can't we dual launch Jazz and Carnival to minimize advertising dollars spent and offer visitors an option? Yes, hijack their minds and wallets. And damnit, lets target Saint Lucians in the diaspora with more gusto because although we are Lucians we are tourists too. Ohhhh you never thought of that huh?

'The Diaspora', as they like to refer to St. Lucians abroad, has money too. The same money the lighter complected tourists have! It has been well established that those in the diaspora contribute significantly to the economy of Saint Lucia with remittances (Western Union, MoneyGram), barrels during the holiday season and throughout the year, and supporting many of those left behind on a monthly basis. So we are not a broke bunch.

Recently the Tourist Board launched their Se Sannou initiative which encourages those of us in the diaspora to market the island to our friends and others with whom we come into contact. Somehow it is expected that St. Lucians will inevitably travel home on vacation. Unfortunately someone has missed the memo that we are also targeted by other countries and cities for the very same dollar!

Anyway, enough about the diaspora aspect and get back to the dual launching. It is an established marketing practice to dual or triple advertise products in order to save significantly on marketing and other associated costs. Don't believe me? Just ask McDonalds, Burger King, Sony Studios, etc.

So getting back to the dismal state of our Carnival. 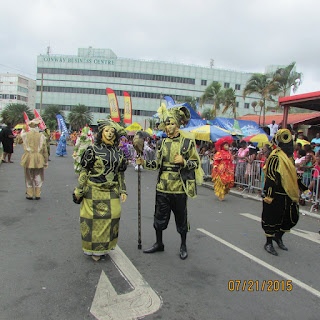 Thank God for the French. Vive le Francaise! Since the French contingents from Martinique, Guadeloupe, and this year Cayenne, have been participating it has been like a breath of fresh air has blown over the parade. Not as skimpily clad as their local counterparts they have been a joy to the crowds. Costumes like what we had back in the day, and basic music instruments which did no less than any big truck. They had a good time just as well, didn't spend as much money to come from all the way over yonder, yet looked better than those Lucians who paid upwards of  $1200 for a VIP, or wait for it, $1800 for a VVIP membership in a Carnival band! Are you serious!!! Yes papa.

The big question is how Carnival benefits the nation past the few days of events. The costumes are just the culmination of a bigger NATIONAL event. We should not forget that calypso, Queen Show, and all the other events are a part of our Carnival. It is time that or GOVERNMENT does something sensible, relevant, and meaningful with it! I say so emphatically, seriously, and deliberately! Why in the blazes do we have a Ministry of Culture, or as they call it now, Creative Industries.

If Carnival is meant to showcase our country, then what is presented at the shows, and on the road shows who we are and what we are made of. Telling the truth what is presented as our Carnival is a downright dirty shame. When we strip all the rum, wining, and carnal behaviour we are not left with anything much.

The real kicker for me yesterday, Carnival Tuesday, was when a Bajan man who was interviewed live on Choice TV said that he came for to experience St Lucian culture and most of what he heard was  Trini music being played on the trucks. He didn't lie because I heard the same too. We need a serious reconstruct of this Carnival event. Just because people have a nice time doesn't mean it is to their ultimate benefit.

Panty and bra covered with feathers year after year is just not cutting it. We all know and say it. Toss photos from a few years of Carnival and mix the up, then try to figure out what year they were taken. I'll wait until next year for your answers. Now do the same with the French bands and I am certain it would be quite easy. Why? You answer.

Carnival has descended as far as possible into the gutters when can excuse highly immoral and straight up unlawful behaviour as our culture. These same actionsat any other time of the year would be considered drunk and disorderly behaviour and subject to arrest. It is just another excuse to get drunk in a country which has a serious alcoholism problem. It is an excuse to grope, oggle, and misbehave expecting there to be some tolerance and acceptance because it's our KOLCHA!

Well if this is our culture crapaud smoke our pipe.