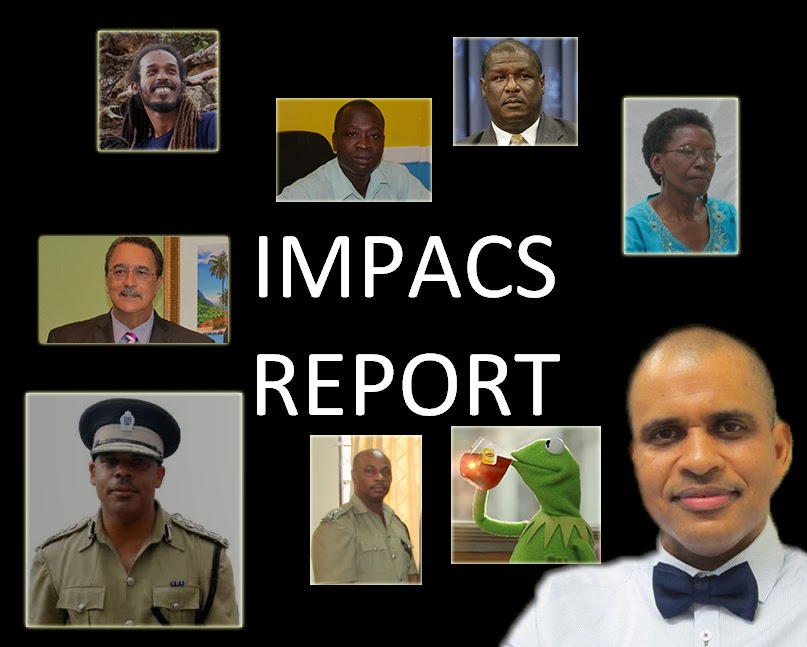 Since the address to the nation last night by Saint Lucia's Prime Minister I have been bombarded by phone and online for my impressions and comments.  This is my statement:
Prime Minister Kenny Anthony's address to the nation last night on the IMPACS report was concise and and factual. It was a well written speech; after all they had over a month to prepare and rehearse. However, the IMPACS report says much more than what it was intended to uncover. Not only has the report shed light on reports of unlawful killings by members of the Royal Saint Lucia Police Force, it also indirectly points a finger at what needs to be done with the police force in general, and glaringly highlights how any measures which were previously implemented have been sorely lacking and ineffective.

Thinking outside the box, and not being distracted with only the scope of the IMPACS investigation, serious question has been called to our judicial system which is also in a horrendous mess. Our attention is also undoubtedly drawn to the state of politics in Saint Lucia.

The screaming question is what measures will be taken to deal with these 'corrupt politicians/government officials, business persons, and police officers.' The only ones who seem to be facing any repercussions at this time are the police officers mentioned in the report. Will the Prime Minister mention, at a later date, how he intends to deal with the other corrupt persons mentioned in the report?

Let me make it categorically clear that I do not, and will not, support unlawful acts in any manner by our police officers. What is wrong, is wrong and being a civilized society we must all abide by the rule of law. Let the chips fall where they may. Just as in any other organization the members of the Royal Saint Police Force come from our society and as a result reflect it in all of its glory and shame. It is up to the good police officers within to ensure that their own good names do not sink below the waves like a just emptied buhchay at Shit Alley.

This whole debacle also calls into question the significance of our independence. It is true that no man is an island and no country in this global village can exist truly independently. However, as a small nation with minimal resources we do find ourselves at the whims and fancies of bigger more powerful nations. We will witness and experience the application of their demands and obligations upon us whenever they feel appropriate. As the age old idiom states, "Beggars can't be choosers."

The United States of America has decided to implement the provisions of the Leahy Law on our little rock of an island because of what it considers to be gross violations of human rights. This Leahy Law, enacted in 1997 by Senator Patrick J. Leahy, states particularly,


"(a) IN GENERAL. – No assistance shall be furnished under this Act or the Arms Export Control Act to any unit of the security forces of a foreign country if the Secretary of State has credible information that such unit has committed a gross violation of human rights."

"(c) DUTY TO INFORM. – In the event that funds are withheld from any unit pursuant to this section, the Secretary of State shall promptly inform the foreign government of the basis for such action and shall, to the maximum extent practicable, assist the foreign government in taking effective measures to bring the responsible members of the security forces to justice."

For diplomatic and other reasons, the US State Department generally does not publicize its decisions to suspend aid to a particular foreign unit however press reports in affected countries usually are an indication of those which have been at the receiving end of this law.

Nevertheless we must be critical thinkers and ask questions of our leaders and of ourselves, and as an independent nation we must make sense of what happens around us in the region and the outside world. Especially in this current fiasco it is imperative that we examine what actions have gotten us on the Leahy Law radar and the consistency of its application.

In 2013, the same year that the US targeted Saint Lucia with the Leahy Law for the police killing of 12 individuals, Jamaica recorded 258 by security by security forces. And amid cries for many years in Jamaica of human rights violations no Leahy Law application has been leveled against that island nation. The burning question is why? Inquiring minds want to know. Between 2004 to 2013 Jamaican security forces killed a minimum of 200 civilians every year!
State Department report on Jamaica Human Rights 2013


According to Prime Minister Kenny Anthony,

"...the United States ceased all financial and technical assistance to our Coast Guard. This meant that the Government of Saint Lucia was now solely responsible for the maintenance of its Coast Guard Fleet. Other sanctions soon followed. The Government of Saint Lucia could not purchase ammunition from the United States for its American made weapons. Members of the Royal Saint Lucia Police Force could no longer participate in any training programme sponsored or financed by the United States. Our Police Officers were also denied participation in training activities in the Regional Security System (RSS), our own regional organization, once the training programme was sponsored or financed by the United States. There were still more consequences. The visa of the former Deputy Commissioner of Police, Moses Charles was revoked. It is to be recalled that he was in charge of Operations when the alleged “extra judicial killings” took place. Further, though the visa of the Commissioner of Police, Vernon Francois, was not revoked he was nonetheless denied entry to the United States even to attend security meetings with officials of the United States..."

In our reliance on the US for significant funding of our coast guard unit it would be logical to question which country benefits for significantly from that arrangement. Although it is true that our coast guard does in fact play the expected role of sea rescue, of the occasional errant fisherman or yachtstman, the true purpose of that American funded section of the police force is for the interdiction of drugs transiting Caribbean waters on its way to the US. 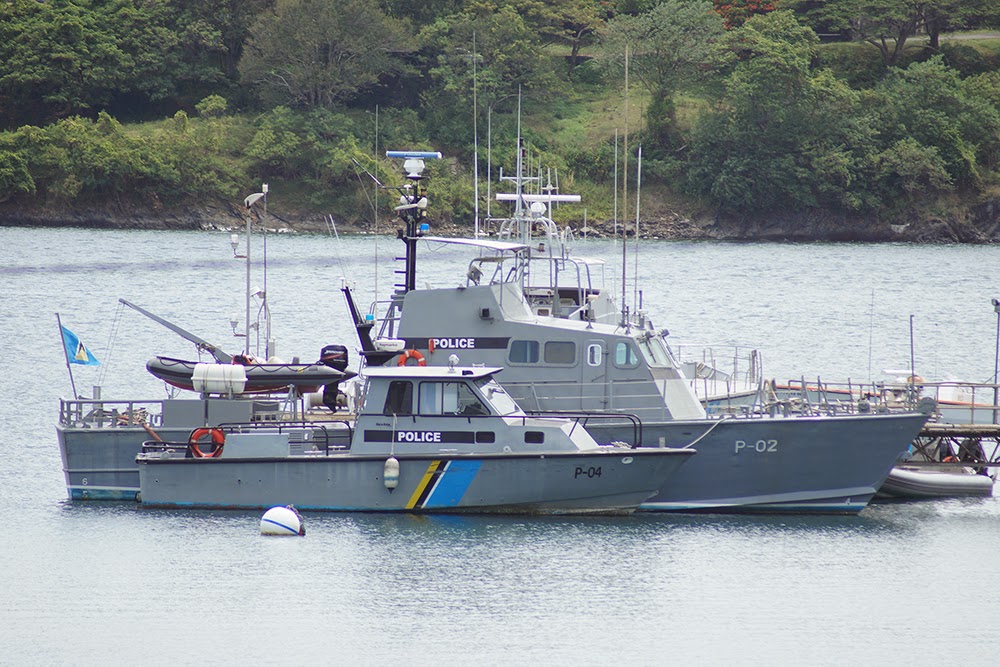 It would also be practical to surmise with the full functioning of the Saint Lucia Coast Guard more lives would be saved on US streets than in Saint Lucian waters.  Lets keep it real! Since the imposition of these sanctions in 2013 how much cocaine would it be reasonable to believe that the Coast was unable to stop on its way up north, 10 pounds, 100 pounds, 1 ton? Obviously a significant enough amount for the influx of greenbacks into the budget of operations.

The arrival of this amount of illicit drugs on US streets quite definitely led to American deaths precipitated through gang violence, turf wars among drug dealers, altercations with police, not to mention the substantial cost to law enforcement!

In June 2013 this is what was reported by the New York Times.

So what really is the reason behind this action? Since the cost/benefit analysis does not jive we are left to speculate. Why would the US shoot themselves in the foot just to squeeze the Royal Saint Lucia Police Force for 12 killings when there were others more deserving of such action? Could it be that the US is using the Leahy Law as a way to send a message in the Caribbean? Is this action a shot across the bow of ALBA states?

On August 25, 2013 I published this writeup on my Facebook page when Police Commissioner Vernon Francois was denied boarding on a US Airways flight bound for the Pittsburgh, Pennsylvania where he would attend a conference of NOBLE - The National Organization of Black Law Enforcement Executives.. I have copied it to a blog post here: Eeny, Meeny, Miny, Moe - Who's Next?

According to Prime Minister Anthony,

"Firstly the Government has decided that the training of police recruits will henceforth include a module in Human Rights Law. All current police officers will be required, in rotation, to attend training to sensitize them to the Human Rights provisions of our Constitution..."

"Secondly, in order to strengthen the pool of Gazetted Officers, the Government, in consultation with the Police Force and our partners, will organize and conduct an accelerated training programme for potential promotion to the ranks of Gazetted Officers. Admission to this programme will be done on a competitive basis. Additionally, we will augment the institutional capacity of the Police Force by increasing the Assistant Commissioner positions by one, increasing the number of funded sergeant positions by five and the number of funded corporal positions by ten."

"Thirdly, we will make provision in this year’s Estimates of Expenditure for the appointment of Special Prosecutors to assist in the prosecution of any cases should the Director of Prosecution so decide to prosecute."


Wasn't it obvious, for a very long time, that these measures needed to be implemented, Leahy Law or not? Why do we always have to be force fed what we already known had to be done? Why are the excuses of our size and limited financial capabilities always used as the excuse for not implementing critically needed measures?  Where will the monies be found for these additions to training? And what about these new positions within the ranks? If we are to remember correctly there has been a freeze on police hiring because of financial constraints. Where 'de monee' coming from?

The application of the Leahy Law against Saint Lucia and the resultant submission of the IMPACS report raises more questions than those answered.

Is Saint Lucia long overdue and in need of a really good shake up?