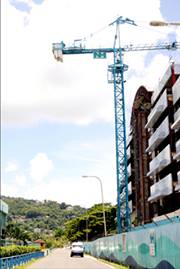 Originally posted: August 18, 2013 at 9:38am
Sometimes we see such blatant disregards for precaution and safety that we are left speechless and dumbfounded. This is what I was afflicted with on Friday past. In fact I had ventured on a late night escapade the previous night, Thursday, to get one last nighttime perspective of the government buildings on the Castries waterfront from a different angle.

Little did I realize, at that witching hour, the danger that lurked overhead on my way to that perfect spot near Pointe Seraphine for that magical nighttime shot. It was brought to my attention by a friend who accompanied me on that late night shoot. I was amazed at my lack of observation. I was equally disturbed at the lack of consideration for prevention of a disaster.

On Friday I returned to the same location to make sure that I had not been dreaming and to get a real daytime perspective on the situation.

Safety is based on suppose. Measures you put in place in the event that something goes wrong, terribly wrong. A buffer, if you will. Construction sites are supposed to be the most stringent as far as safety is concerned. After all, accidents occur there very frequently. There are very stringent standards for safety of construction workers onsite, as well as any visitors to such site or persons in close proximity to such sites. This is why construction sites have fences and controlled access. It is the reason why visitors and employees are required to wear hard hats at ALL times while on site.

I now draw your attention to the construction site on the Pointe Seraphine road in Castries. The tower crane there is used for lifting construction materials and other equipment as needed. There is a fence surrounding the site. Yet the crane extends beyond the confines of the fencing and actually overhangs the very public roadway leading to the Pointe Seraphine cruise ship facility nearby. The counter weight section of the crane, consisting of weighted concrete blocks to stabilize the crane while under load overhangs the roadway. WHAT!! What if there is a catastrophic failure of this section of the crane? Where will it fall? Should it not be within the confines of the construction site if there is such a failure? And the big question...what if that section of crane failed and fell on a Coaster carrying 40 passengers traveling from a cruise chip berthed at Pointe Seraphine?

As I was taking my pictures I observed two men exiting through a door in the surrounding fence. They did not seem to be the regular construction workers. The did have hard hats but were also better dressed and not grimy looking. Possibly visiting government engineers. Did I forget to mention that this is a government construction project?

Me:  "Are you engineers here at this construction site?"
First guy:  "Why?"
Me: "This crane looks like a disaster waiting to happen. Look at its location."
First guy: "Well nothing is wrong, it's over the building."
Me: "Well the counterweight section is over an active roadway."
First guy: "Well move it uh!"
Second guy: "Chooooops"

Damn idiots! Instead of seeing the danger and at least acknowledge it, they choose to dismiss me. But if the shit hits the proverbial fan they will all be pointing fingers and trying to save their own miserable skins.

With thousands of passengers and workers traversing this roadway when a cruise ship or cruise ships are in the harbour; are we as a tourist destination, willing to live with the fallout from a possible tragedy such as this?

Is it just me, or is this a disaster waiting to happen?

You be the judge.