Is Jan Dupal a sorceress? 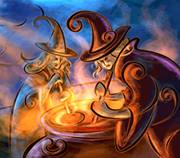 In 1975 my family moved from the mountain that is Pavee Road to Mongiraud, Gros Islet. At that time moving to that area was akin to moving to the Australian outback or the Amazon. Bus service was practically a daytime event , and if you were unfortunate enough to be stuck in town (Castries) after 7 pm, you were on your own. Leaving the city after 7 pm required you to head over to the corner of Jeremie and Peynier streets next to the cabaret to 'hike' a ride up north. To those who don't recall the cabaret I speak about was located where the current craft market resides. The Rodney Bay/Reduit/Bonne Terre, uh-feh the Gros Islet area was a wilderness at best. Bonne Terre was sparsely populated with only a few houses hidden from sight in the kuhpesh. From Volney's Gas Station to the Gros Islet gap all that met the eye was flatland and cows. That's right, bef tout patous. There were the two 'A' frame houses opposite the Bonne Terre gap and the three demo Canadian houses, on the left, just before the Rodney Gap to Baywalk Mall. It was a time when there was no 'Gros Islet Friday Night' (for real!). Living any further into Beausejour than the Blue Lagoon Guest House was considered an act of madness as that area was a mosquito infested swampland. You could not pay people to move in there. Now it's some of the most sought after real estate in St. Lucia. With all of its remote charm Gros Islet was considered by many to be a haven for the black arts. That's right people, Gros Islet was overrun by majie nweh, jean gazhet, la diabless, and obeah. Monchy particularly was black magic central. You dare not be walking on any road in that vicinity late at night and not be smoking a cigarette. And don't forget to wear your shirt inside out (wrong side). Coffins blocking the paths of unfortunate late night travelers was a common story. And boloms! Haaaaaaaaa boy! You better be wearing your underwear inside out too.

Anyway, so much for the brief history lesson about the north.

Somewhere along the way Janice Dupal moved up north (as we say in St. Lucia). According to a conversation I had with her yesterday she intimated that it was always her dream as a girl to become involved in fashion and entertainment. You see, Janice and I go waaay back and can rap about random stuff like that. Don't ask, don't tell. Our conversation sprung up because I wanted to know how she was able to make the just concluded Miss Gros Islet Beauty Pageant such a success.

To be absolutely honest I had not been interested in attending that show. It was only because of a friend who would not have been present that I was asked to take photos so they could experience for themself the excitement of that night. Imagine I didn't even get a free ticket to work like a buick. I arrived late and missed the swimsuit segment because I had been covering another extravaganza that day; the UWP Convention in Marigot. I will forever blame them for that. Of course I had to sweeten up before I left for the show, so that took up more of the ever important swimsuit segment.. Damn!

To be quite honest (didn't want to say Frank because my name is not Frank) I was pleasantly surprised with the quality of the show. Everything flowed like clockwork. Many times I asked myself whether I was truly still in St. Lucia. The performances were world class. The contestants, the organization, the everything. My gosh! How was this possible? The dresses were out of this world. The crowd was wonderful. And all that after I missed the swimsuits! Can you even imagine what my state would have been had I witnessed, first hand, with a zoom lens, the the the the....well you know, the swimsuits!

Janice attributes the success of the show to the cooperation of the contestants, the chaperones, and a strict adherence to a properly scripted performance. She is the chairperson and pageant coordinator of the Gros Islet Cultural Development Committee. She also lauds the assistance of her daughter, Consuelo Dupal, who is also the Chief Chaperone and handles the public relations.

Which now brings me to the big question, how is it that the National Carnival Queen Show has not been able to have such a success for so many years? In fact as far as most St. Lucians are concerned, from time immemorial! Maybe they should take a page or two, or three, from Janice and the folks at Gros Islet. As far as I am concerned The National Carnival Queen Show should be dropped over the Sans Souci Bridge with a brick tied around it's neck just like so many unwanted pets which met their untimely demise over the years in St Lucia. It's time to start all anew with a new pet.

After so many years of bad vibes with Queen Show are we to take Janice at her word that the success of the Gros Islet show was simply because of 'cooperation'? Mere mortals had failed so miserably through the years, are we to now believe that  things had somehow turned in the north?

It is said that those into black magic and bagaille demoo have a special look in their eyes. Next time you meet Jan Dupal look into her eyes, really deep! But make sure your underwear are on wrong side. Just in case.